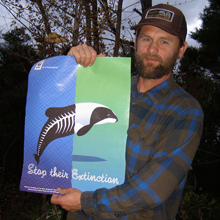 First known as a professional surfers, Chris along with brothers Keith and Dan impressed the world over with their surfing. Along with surfers like Pancho Sullivan, Myles Padaca, Noah Johnson and Strider Wasilewski, Malloy was part of a new breed of pro surfer who put travel and big waves way ahead of competition on the priority list. He became a fixture in the surf magazines, was a top-biller in Taylor Steele's momentous surf videos and, in one article, was even labeled a "New School ringleader."

Home base for Chris is a working ranch in California, where he lives close to the land with his wife and kids. The oldest of the three Malloy brothers and the director of 180° South and a number of highly regarded surf films, his life is a blend of tradition, conservation and creativity. “The best things in life,” he says, “are the simplest.”

Chris' most recent film, described as Well-Groomed and Powerful, "Groundswell" is Headed Your Way