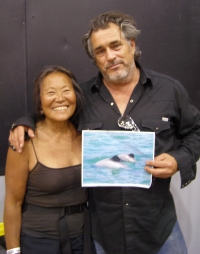 Steve Olson "Bulky" dominated vertical skating in the late 1970's. In 1978, John Krisik, director of Competition for Santa Cruz Skateboards, summed up Steve's talents in the magazine, Wide World of Skateboarding: "I believe that Steve is the number 1 bowl rider in the world today. He has so many strengths: He's physically sound, well coordinated and has a great sense of spontaneity. He can walk into an unfamiliar bowl and begin to rip it right away." Steve rode for Santa Cruz and was on the original Test team for Independent Trucks.