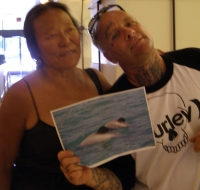 Jay Adams (born February 3, 1961) is an American skateboarder most prominently known as one of the original members of Z-Boys skateboarding team.

He is considered one of the most influential skateboarders of all time. Adams is featured prominently in the award winning documentary Dogtown and Z-Boys and in the 2005 dramatized film account of the Z-Boys origins, Lords of Dogtown.

In the movie, he was played by Emile Hirsch, who was praised by critics for his portrayal of the original Z-Boy.