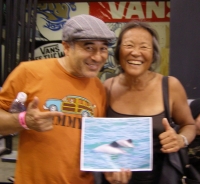 Steve Caballero (born November 8, 1964, San Jose, California) is a professional skateboarder and musician. Steve was born in the year of the dragon, and has had several board graphics that feature dragons. Caballero started skating in 1976 at the age of 12. He was sponsored as an amateur by Powell Peralta in 1978 at the age of 15. He turned pro in 1980 at the Oasis Skatepark, Southern California during the Gold Cup series. He is a member of the Bones Brigade, and has appeared in many of their videos, including The Search For Animal Chin. His current sponsors include Powell Peralta Skateboards, Bones Bearings, Independent Truck Company, Autobahn Wheels, Vans Skate Shoes, Skull Candy headphones, Ohana Boardshop and Protec Helmets. His past sponsors included Tracker Trucks, Standard Trucks, Bones Wheels, and Red Dragon Apparel. Caballero has been featured on the cover of Thrasher Magazine and several other publications.