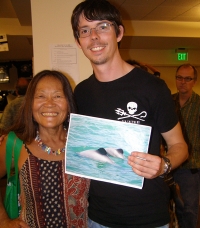 A fervent advocate for the rights of animals, Peter believes that in their capacity to suffer, animals are our equals. From the foreboding Labrador Coast to the treacherous Antarctic Continent, Peter has sailed the seven seas trying to put those words into action. He has saved as many liveas as he can from illegal whaling, sealing and destructive fishing practices.

In his five years with Sea Shepherd, Peter has been held hostage by Ecuadorian fishermen; physically attacked by sealers; assaulted and arrested by the Canadian Coast Guard (twice); involved in a confrontation which included the side-swiping of an illegal whaling ship; been rammed by another; and pulled up countless miles of fishing longline. In the war to defend life in the oceans, this Swede is far from neutral.

Between campaigns, Peter is finishing a degree in media and communications at Stockholm University and is actively campaigning with the Swedish Animal Rights Alliance.