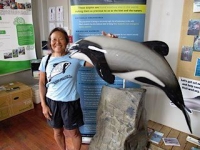 "As a skateboarder, Peggy Oki broke the gender barrier as the lone female Zephyr team rider. Her iconic style mirrored her fellow 'Dogtown Z-Boys'. As an avid surfer, she has travelled the world in search of warm uncrowded waves. As a passionate environmentalist, Peggy Oki has headed numerous campaigns voicing concerns for the health and safety of sea creatures throughout the world’s oceans. Her full-time commitment to these causes has inspired action in people all over the globe. For many years now, Peggy has been a personal inspiration to me on so many of levels. She truly brings higher meaning to the word 'radical'."