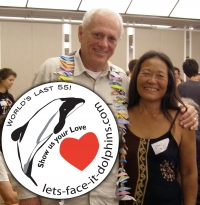 If you watched "The Cove" or have followed previous postings by the Origami Whales Project* reporting work for dolphins with friend and hero Ric O'Barry and Save Japan Dolphins, you would know how excited and grateful we are in announcing Ric's support of our "Let's Face It" Visual Petition (VP) campaign. Ric wrote: "Lets get behind this urgent effort, folks!" and with his blessings to create this VP on his behalf, "We love Peggy".