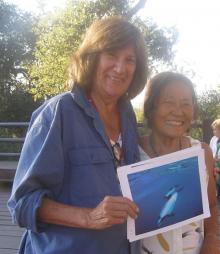 Co-founder of Heal the Ocean, Hillary Hauser (pictured left) has been a writer/journalist/news reporter since 1968, with published books about the sea and underwater exploration, and magazine articles including National Geographic, Geo, Islands, The Surfer’s Journal, Reader’s Digest and the Los Angeles Times. From 1969 through 1977 she was West Coast stringer for Ocean Science News, Washington D.C., and from 1981-1986 was ocean/marine reporter for the Santa Barbara News-Press. She also was the former music critic for the Santa Barbara News-Press and is a long-time classical pianist.

Heal the Ocean focuses on wastewater infrastructure – sewers and septic systems – as well as ocean dumping practices that have contributed to ocean pollution. "We are focused on Santa Barbara County, but our methods are now serving as a model for other coastal communities across the country."

We'd like to thank Hillary, our beloved Jack Johnson who is an Honorary Board of Directors for the Heal the Ocean, and HTO supporter/surfing legend Shaun Tomson for "Showing Us Your Love!" for our last 55 Maui's & 25% remaining Hector's Dolphins of NZ.