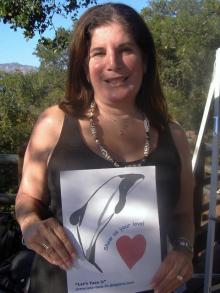 Over 4 years ago, at a press conference against commercial whaling, we met the now Santa Barbara Second District Supervisor, Janet Wolf. We are grateful to Janet also "Showing Us the Love" for "our" Maui's & Hector's Dolphins of New Zealand.

In addition to her service as a Supervisor, Janet represents the Second District and the County of Santa Barbara on the following boards and commissions: