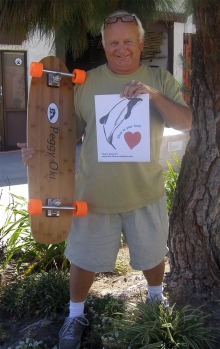 Its been estimated that over 6.1 million people snowboard just in the US alone. According to Chuck Barfoot, the reason snowboarding was invented was because a few surfers wanted to surf in the snow—they totally related it to surfing. If it wasn’t for the influence of Chuck and a few others, we wouldn’t have snowboarding.

Chuck was inducted into Transworld’s Snowboarding Hall of Fame in 1997.