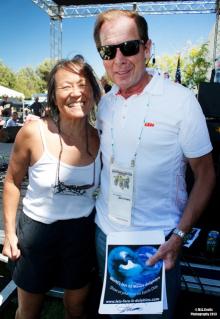 Roger DeCoster’s name is almost synonymous with the sport of motocross. DeCoster is generally recognized as the best-known racer in motocross in the first 50 years of the sport. His racing accomplishments are simply remarkable. He won five 500cc Motocross World Championships; tallied a record 36 500cc Motocross Grand Prix victories; was a member of six winning Belgium Motocross des Nations teams; earned four Trans-AMA Motocross Championships; was a Gold Medalist in the International Six Day Trial (Enduro); and earned numerous national championships in his native Belgium, including a national Trials title.

DeCoster continued to find success after his racing career. He was the manager of the first U.S. team to win the Motocross des Nations in 1981. His stature is such in the world of motocross that he is often simply referred to as "The Man."

Learn more about this true legend of motocross: http://www.motorcyclemuseum.org/halloffame/detail.aspx?racerid=94